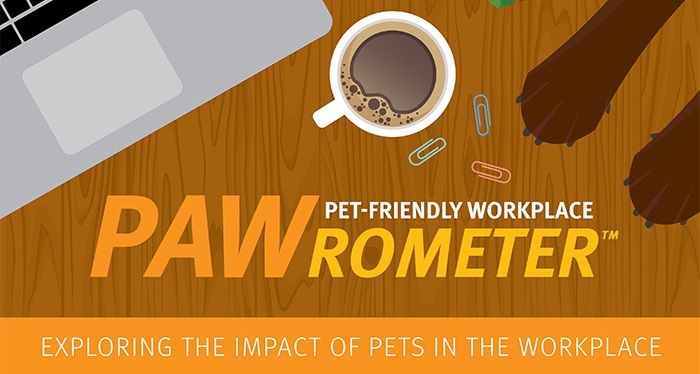 It’s no mystery Americans love their furry friends and increasingly consider pets family members. Banfield Pet Hospital® set out to better understand the prevalence, impact and perceptions of pet-friendly workplaces and other pet-related policies in its second annual PAWrometer™ survey.

Spoiler alert: While policies permitting pets in the workplace remain highly favorable for employees, other pet-related benefits like paid pet bereavement leave, general pet-related paid time off (PTO), and paid leave to care for a new pet – matter even more to workers.

Key findings from this year’s survey revealed the following about pet-related benefits:

However, Banfield’s findings show pet-friendly workplaces remain a strong draw to employees when it comes to retention and recruitment. Half of employees at non-pet-friendly workplaces reported they would be more likely to continue working at their current company if pets were allowed at the office, and 35 percent consider being able to bring their pet to work an important factor when looking for a new job.

“Banfield’s purpose to make a better world for pets is not just something we say, it’s something we live day in and day out in our office, too,” said Brian Garish, ‎President, Banfield Pet Hospital. “With more than 25 years of welcoming dogs into our headquarters, we know first-hand the positive impact of pets in the workplace, and I love that we’re able to quantify the impact of pet-friendly policies through the PAWrometer survey data.”

According to Banfield’s PAWrometer 2017 findings, employees between the ages of 18 through 35, also known as millennials, are particularly receptive to pet-friendly workplaces, with an overwhelming majority believing these work environments positively impact employees and company culture. For instance, the study found millennials are significantly more likely to find value in the positive impact pets at work have on employees (73 percent) and the workplace (70 percent) compared to non-millennials, who are significantly less likely to share the same feelings, with 61 percent saying pets have a positive impact on employees—and even fewer (56 percent) on the workplace. Additionally, while 43 percent of millennials at non-pet-friendly workplaces indicated they believe their employers should allow pets in the office, only 24 percent of non-millennials feel the same.

Additionally, among those companies that do not currently allow pets at work, at least two-thirds of HR decision makers agreed improvements would be seen across all facets of the workplace if pets were permitted.

Bonus: Pet-adoption rates could be on the rise thanks to pet-friendly policies

“We’ve long recognized that pet-friendly policies positively impact everything from recruiting and hiring to morale, productivity and retention, but our survey also revealed an unexpected benefit: the potential to favorably influence rates of pet adoption,” said Garish.

Banfield’s findings suggest that with more opportunities offered to employees to help care for pets during work hours, the number of pets adopted may increase. Its survey showed that more than one-third of employees and approximately half of HR decision makers at non-pet-friendly workplaces said they would get a pet or add another pet to their family if they were able to bring pets to work. Further, more than 60 percent of those surveyed in both audiences believed people would adopt more pets if their company offered pet-friendly policies.

For an executive summary and more information on the Banfield Pet-Friendly Workplace PAWrometer, visit Banfield.com/PAWrometer.

About the Banfield Pet-Friendly Workplace PAWrometer™

The 2017 Banfield Pet-Friendly Workplace PAWrometer surveyed 1,000 employees and 200 HR decision makers from a mix of company sizes and industries across the U.S. between February 8 and 19, 2017. The survey was administered online, and all respondents were recruited from an online research panel and screened to ensure they meet the following criteria:

Founded in Portland, Ore., in 1955, Banfield is the largest general-veterinary practice in the world. In 2007, Banfield joined the Mars, Inc. family of businesses, and today has more than 975 hospitals across the United States and Puerto Rico. More than 3,500 Banfield veterinarians are committed to providing high-quality veterinary care for three million pets annually. Banfield's charitable arm, the Banfield Foundation, was established in 2015 as a 501(c)(3) nonprofit organization dedicated to improving the well-being of pets and communities. Press seeking additional information are invited to visit our media and press page or call the Media Hotline: (888) 355-0595.

For journalists and Banfield associates dealing with time-sensitive news matters.

This phone service is intended for the exclusive use of journalists and Banfield associates dealing with time-sensitive news matters.

Thank you for your Inquiry

Someone from our media and press team will get in touch with you shortly.

Find a Banfield near you

Search by zip code, or by both city & state.

This field is required.